Why is Recidivism So Common?

Previously incarcerated people face many personal and institutional challenges to successfully integrating back into society without a recidivating event.
Share:

This blog was originally published on February 25, 2020.

More than half of prisoners are re-arrested within two years of their initial release. Eighty percent recidivate within seven years.  When government and commercial organizations prioritize breaking this vicious cycle, the benefits have shown to be vast and impactful:

The cost of recidivism is high.

One 2018 study suggested the cost of a single recidivism event to be more than $150,000. Several factors make up this total: 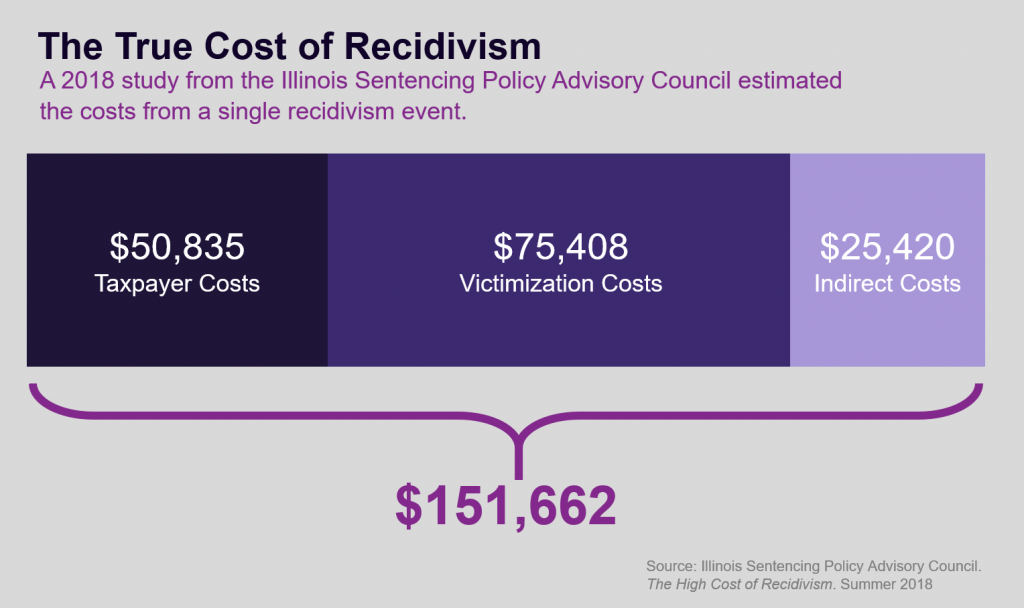 Previously incarcerated individuals, however, face many personal and institutional challenges to successfully integrating back into society without a recidivating event. Many housing providers, employers, and even some social programs limit access and opportunity based on criminal activity. Justice-involved persons are likely to qualify for many income-based assistance programs and are more likely than the general population to have mental health problems.

Each of these functions has its own set of unique circumstances, but there are also common challenges shared among government agencies and commercial organizations involved in a person’s life post-release.

Successful reentry requires cooperation and efficiency from a large number of government programs.

To adequately meet the needs of the recently incarcerated population, jails and prisons must work collaboratively with a variety of government, commercial, and philanthropic organizations. During incarceration, such facilities are directly responsible for providing these basic needs to their housed populations. But upon release, this support network diversifies significantly.

In addition, a newly released individual may need to interact with more than 25 different organizations to successfully and legally reenter society:

The sheer volume of organizations that play a part in a successful post-incarceration transition presents challenges.

Compounding the problem is the need for collaboration between certain agencies. While everyone involved in reentry plays an important role in ensuring success, agencies that ensure a released individual’s basic needs are met play a particularly important role. Access to housing, food, physical and behavioral healthcare are critical in the first few days post-release to reduce the chance of recidivism. The state programs that administer these services tend to be some of the largest agencies in each state, and it is critical that they work together in order to produce effective outcomes.

For example, in the case of providing quality behavioral healthcare, a seamless transition from prison health care providers to post-incarceration providers is crucial. In most instances, managing this process is time-intensive and manual, often reliant on prison or jail staff to update the relevant stakeholders when a person is released from a jail or prison.

To facilitate a smooth reentry, and thereby reduce the likelihood of recidivism, it is imperative that such organizations implement an automated, data-driven process that alerts the disparate, yet necessary, stakeholders to changes in an individual’s custody status.

Successful reentry requires prospective employers to take on risk, and many lack the tools to manage risk effectively.

It’s widely known that finding employment is one of the most critical—and challenging—steps for justice-involved persons. Jobs provide income and stability, and numerous studies have documented the inverse relationship between employment and recidivism. According to the Prison Policy Initiative, the unemployment rate among formerly incarcerated is five times higher than the general public, and even higher among those who have been released from prison within the last two years.

Of course, there are multiple factors contributing to high unemployment among justice-involved individuals. A Brookings Institute report cited a lack of work experience before being incarcerated, poor job skills, family income, and residence “in neighborhoods facing extreme hardship”  as factors. Additionally, as many as 30% of jobs require occupational licenses, and many licensing agencies prevent those with recent criminal records to attain licenses (source).

During this period of low unemployment, and as Fair Chance Hiring initiatives continue to gain traction, more employers are looking to previously incarcerated individuals as potential job candidates. In addition to overall changing attitudes on incarceration, businesses are faced with an economy where there are more open jobs than there are unemployed adults.

With the prevalence of workplace violence, it has become apparent that an employer cannot solely rely on a pre-hire screen to mitigate risk. An individual’s risk profile is not simply historical in nature, but continues on throughout the tenure of their employment.

As the American workforce expands, and companies increasingly turn to technological solutions help solve for gaps and vulnerabilities in their organizations, the opportunity is born where more candidates with criminal records can be hired with confidence. With access to real-time, data-driven tools that identify new criminal events among current employees, organizations can gain valuable human assets, while continuously monitoring for criminal activity among their workforce. This opportunity not only positively impacts the individual and lessens the likelihood of a recidivism event—but strengthens and facilitates a safer, more productive society as a whole.